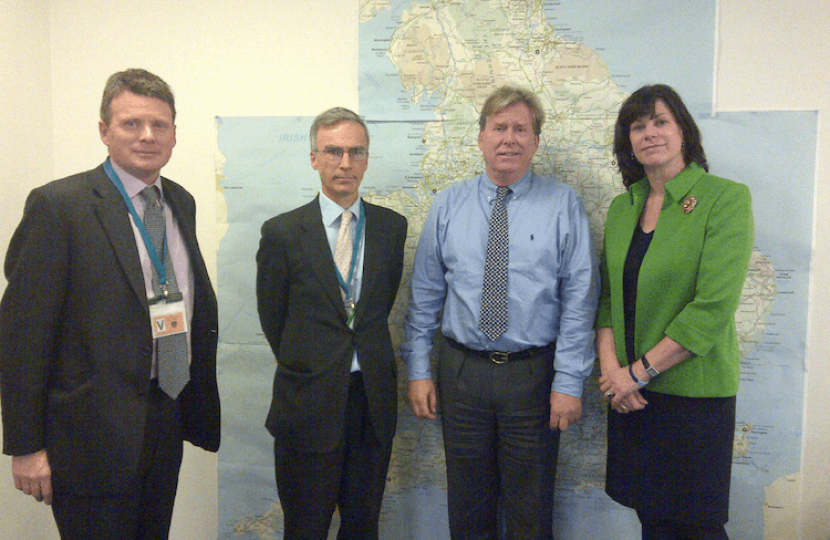 Many of you will be aware that the franchise for the Great Western rail route is currently up for renewal.

The tender process (ITT) began at the end of the summer but was put on hold and there is currently an enquiry into the franchising process which will report early next year.  Following this, the process will either begin again, or continue from where it paused in early October.

When the ITT was published in the summer this year, concerns were raised by rail users west of Newbury that there was no stipulation for direct services to and from London Paddington and this could, following electrification, mean that services from Westbury, Pewsey, Bedwyn, Hungerford and Kintbury, could be downgraded to a shuttle service to/from Newbury.   Since then, I have been lobbying hard to ensure that this does not happen.  I have had meetings with two of the preferred bidders (First Great Western and National Express) and, on 13th November, met the Minister for Rail, Simon Burns MP.    I was joined at this meeting by Claire Perry MP, and Andrew Murrison MP who represent areas along this line.

I am pleased to say that the meeting with the Minister was productive and I felt that he listened to, and understood, our concerns.   Whilst the review into franchising is continuing, the Department won’t be making any changes to the ITT.    It is the Government’s policy not to be too prescriptive in franchises, but the Minister did accept that there was a need to have some safeguards.  He did also confirm that, before the ITT was put on hold, he had already added two direct peak services in each direction to the specification, which is a positive commitment.   It is not as many as we would like, but it is a step forward and, because this is specified, it will be easier to encourage the franchisee to add more direct services.

I was very forceful in stressing that any downgrading of the service would have a serious impact on the area as a whole, it would not only affect commuting time, but would put pressure on the roads, impact businesses and voluntary groups and those wanting to travel for leisure purposes.

The most positive part of the meeting was learning that the Department has instigated a Review into electrification beyond Newbury, and the viability of extending it to Westbury.  This is something I have been pushing for for over a year.  This is good news, and we must hope that this will happen as it could mean a much better service for stations west of Newbury than they have now. They will be reporting on this review in the New Year.

I will continue to work hard on this and related railway issues.